(CNN)Russian missile strikes have hit the southern Ukrainian port of Odesa, just one day after Ukraine and Russia agreed on a deal that would allow the resumption of vital grain exports from the region.

Serhii Bratchuk, a spokesman for the Odessa military administration, said two missiles hit the infrastructure of the port and two were shot down by Ukraine’s air defense.

At least six explosions were heard in Odesa, according to Ukrainian member of parliament Oleksiy Goncharenko.

It comes one day after ministers from both Ukraine and Russia signed an agreement — brokered by the United Nations and Turkey in Istanbul — to allow grain exports from Ukrainian Black Sea ports aimed at easing the global food crisis sparked by war. 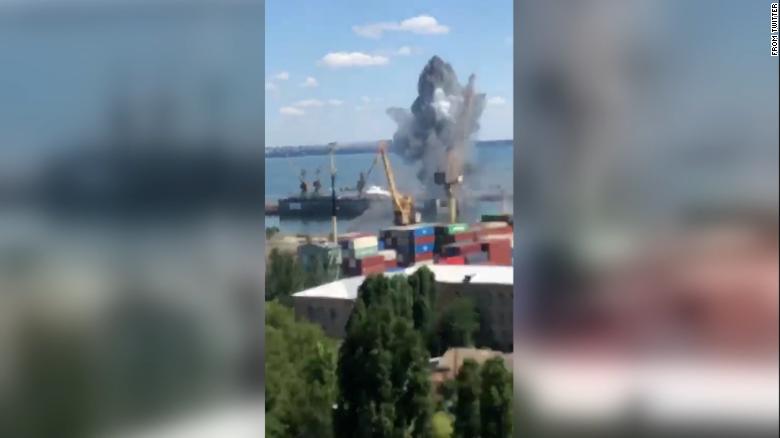 Footage showed the aftermath of the attack.

“Russia agreed to some deal on grain export, but immediately after this attacked it — showing they want to continue to threaten the world’s food security,” Ukrainian member of parliament Oleksiy Goncharenko said Saturday in an interview with CNN.

“There will be new campaigns where [Putin] will definitely attack Odesa and the only answer of the world for this is to give weaponry to Ukraine – finally to give Ukraine long range missiles, fighters. And that is the only answer for this aggression from Putin and to restore international order,” he said.

The strikes hit a pumping station at the port, Serhii Bratchuk, spokesman for the Odesa regional military administration, said Saturday.

“Today, 4 rockets hit Odesa. Thank God that our units of the air defense forces destroyed 2 missiles on approach. Two more missiles flew to the port, to the infrastructure facility,” Bratchuk said in an interview with Ukrainian media. “This is a pumping station, which is located on the territory of the Odesa port.”

Bratchuk said there were no casualties and that the grain stored there was not damaged. He also said the strikes were launched from a warship.

Friday’s deal promised to unblock ports on the Black Sea to allow the safe passage of grain and oilseeds — some of Ukraine’s most important exports.

Russia has so far been blocking maritime access to those ports, meaning that millions of tons of Ukrainian grain has not been exported to the many countries that rely on it.

“Today, there is a beacon on the Black Sea. A beacon of hope — a beacon of possibility — a beacon of relief — in a world that needs it more than ever,” UN Secretary-General Antonio Guterres said Friday at the signing ceremony, which was attended by Ukrainian and Russian ministers.

But Saturday’s attack led to anger and concern over the future of that deal.

“This is all you have to know about “agreements” with the Russians. Explosions in the seaport of #Odesa. One day after the agreement with #Turkey and #UN was signed re export of #Ukraine’s #grain under which #Russia has committed not to shell the port,” Ukrainian parliament member Solomiia Bobrovska tweeted.

Brachuk has advised residents to stay in shelters as the air alerts continue.

US Secretary of State Antony Blinken said Russia’s missile attack “casts serious doubt” on the grain deal reached by Russia and Ukraine just the day before.

“This attack casts serious doubt on the credibility of Russia’s commitment to yesterday’s deal and undermines the work of the UN, Turkey, and Ukraine to get critical food to world markets. Russia bears responsibility for deepening the global food crisis and must stop its aggression and fully implement the deal to which it has agreed,” Blinken wrote in the statement.

“This was a glimmer of hope,” Samantha Power, Administrator of the United States Agency for International Development, said Saturday in relation to the grain deal.

“This is grotesque and it’s just the latest indication of the cold indifference Vladimir Putin has for the cost of the war in Ukraine — a manmade war that he created for no reason; the cost in Ukraine to human life there; and the ripple effects all around the world,” she said.

Turkish Defense Minister Hulusi Akar said Saturday that Russia claimed it had “nothing to do” with the strikes.

“The Russians told us in certain terms that they have nothing to do with this attack. They monitor the situation very closely and in detail,” Akar said in a video statement.

“It really concerned us that such an event happened after we signed the deal on grain shipments. We are disturbed as well. But we continue to fulfill our responsibilities about this agreement and we also expressed in our meetings that we are in favor of the parties to continue their cooperation here calmly and patiently,” said Akar, who represented Turkey at the signing of the grain deal in Istanbul on Friday.

“They stated that one of the missile attacks hit one of the silos there, and the other one fell in an area close to the silo, but the important thing there is that there is no problem with the loading capacity and ability of the docks, and that the activities there can continue,” he said.